Dadhichi awards ceremony – A lifelong commitment to save lives Let the life flow to another life with Organ donation: Dr Chand 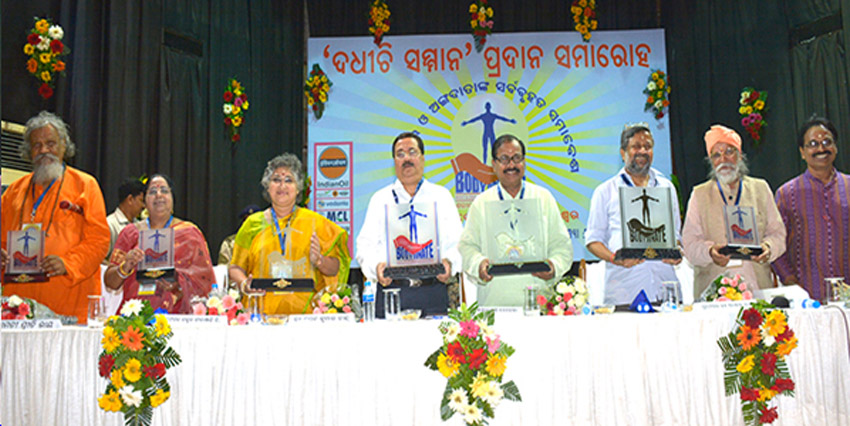 Bhubaneswar, 23/07/2016: Noble initiatives such as organ donation would help usher in a transformed era of humanity and sacrifice. Let every one of us, make a conscious decision to donate our organs and give a new lease of life to the unfortunate victims of organ failure” said Dr. Tapan Kumar Chand, while addressing as chief guest at the inaugural session of Dadhichi award ceremony, organized by Body & Organ Donation Initiative (BODI), under the aegis of Loksevak Mandal and The Samaja in Bhubaneswar on 23rd July.
Dr. Chand in his address said that Organ donation in India needs to be addressed on a wider scale. In a country with a population of more than a billion people, the number related to organ donation is discouraging. It’s not just about numbers but about awareness and change in attitude. Myths, religious, cultural taboos about organ donation need to be dispelled.
Appreciating the organizers, particularly Dr. Pravas Acharya, President, BODI, for his lifelong commitment to save lives, Dr. Chand reaffirmed his belief that Odisha is set to lead the way for organ donation in the country. He also stressed on bringing organ donation drive into the digital realm by development of mobile app to simplify the procedure and issue of identity cards. Worth mentioning Dr. Chand along with spouse Smt Preeti Roy had earlier joined this noble initiative to donate organs.
Making a lifelong commitment to “Gift Life” about 500 donors, who have registered for organ and body donation, were felicitated on the occasion and were conferred with the Dadhichi Samman.
Inaugurating the programme, Shri Sashibhusan Behera, Hon’ble Minister of Finance and Excise, Govt. of Odisha, lauded the organizers for motivating people towards this noble cause. Inspired with the noble initiative, the Hon’ble Minister also pledged to donate his organs too. He also encouraged the awardees to be the change agents, inspiring more people to come forward for organ donation.
Among others, Dr. Prasanna Kumar Patsani, Hon’ble Member of Parliament, Prof Ashok Kumar Das, outgoing Vice Chancellor, Utkal University, Prof. Dr. Geetanjali B., Director, AIIMS, Bhubaneswar and Smt. Preeti Roy, President, Nalco Mahila Samiti also spoke on the occasion. Shri Niranjan Rath, Secretary, Loksevak Mandal presided over the programme.