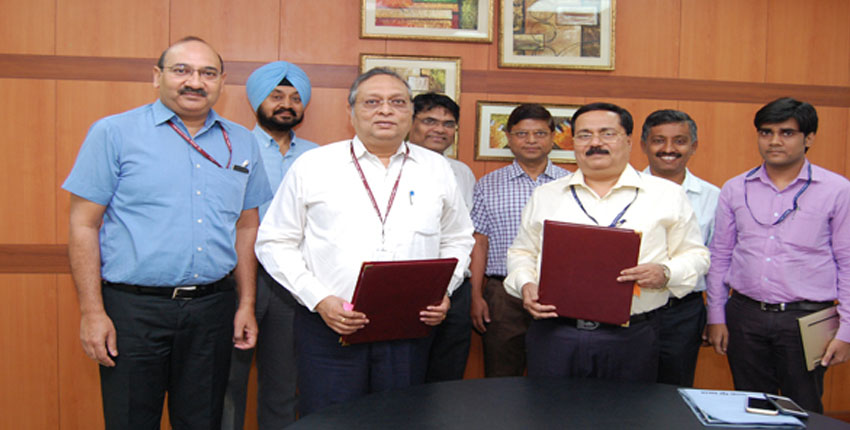 Bhubaneswar, 25/05/2017 : Navratna CPSE National Aluminium Company Limited (Nalco) has signed an MoU with the Ministry of Mines, Govt. of India setting higher targets in production, productivity, turnover and CAPEX for the FY 2017-18. The MoU was signed between Shri Arun Kumar, Secretary, Ministry of Mines and Dr. Tapan Kumar Chand, CMD, Nalco in New Delhi on 25th May 2017. Secretary Mines complimented the management in NALCO for the excellent performance of the company in 2016-17 and its robust business plan for 2017-18. The MoU was formulated as per the new Department of Public Enterprise guidelines and finalized after discussions with both Inter-Ministerial Committee as well as Ministry of Mines.
As per the MoU, the target for revenue from operations has been fixed at Rs.8100 crore (net of excise) which is Rs 700 cr more than previous year. The MoU has also set 100% targets for production of both bauxite and alumina i.e. 6.825 million tonnes and 2.1 million tonnes, respectively. Aluminium production target is set at 4.4 lakh tonnes as compared to the previous fiscal. The targets are an all time high for the company and is expected to push the profitability of NALCO despite increase in expenses on account of enhanced electricity duty, RPO obligations, employee wage revision and power & fuel oil.
The Company has a CAPEX target of Rs.1158 crore against Rs.873 crore achieved in 2016-17. The expenses are to be incurred in several new and ongoing projects like the 1 million tonne refinery, Utkal-D&E coal blocks, solar and wind power projects, modernization and up- gradation of Plant & equipments. In yet another strategic move on the human resource front, the company has set a new HR succession plan, HR Audit, online ACR and training in reputed business institutes for its employees. The plan will enable the company to synchronize its workforce and skill set in line with the new business plan which is already in an advanced stage finalization.
Shri Subash Chandra, Joint Secretary, Ministry of Mines, and other senior officials of Ministry and Nalco were present on the occasion.