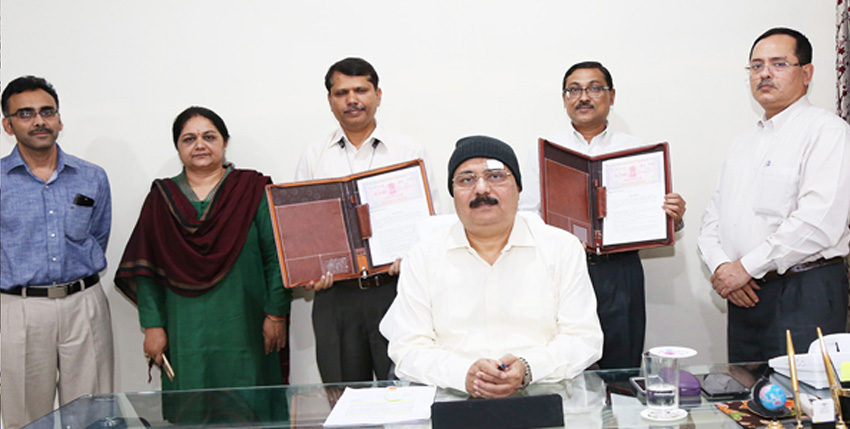 Bhubaneswar, 05/04/2018: After successful commissioning of first-of- its kind Defluoridation plant in the World using Nano based Emrion technology, the aluminium major National Aluminium Company Limited (NALCO) is all set for using this technology in commercial scale. It may be noted that NALCO has been using this technology in its Smelter Plant since February 2017 which has successfully addressed the endemic problem of fluoride contamination of water in Angul sector.

In this line the Company today signed a MoU with M/s Eesavyasa Technology Pvt Ltd of Hyderabad. The MoU was signed between Shri Subrat Kar, GM(R&D), NALCO and Shri D.P. Chakravarthy, MD, M/S Eesavyasa Technology. As per the MoU, NALCO would be getting royalty on setting up of commercial scale defluoridation plants in other Aluminium plants and other industries based on this technology for removal of fluoride to provide chemical free water for drinking purpose.

Speaking on the occasion, Dr. Tapan Kumar Chand said that this breakthrough technology is an example of sustainable solution that would cater to the people, planet and profit aspect of an industry in a balanced manner. “Creating and providing a positive environmental impact in a proactive manner has always been the motto of NALCO” he said. Dr. Chand added that this technology can be used in future for providing safe drinking water to people during major events like Rath Yatra.

Worth mentioning that this initiative of the Company has received much appreciation and accolades at the National level and has also been selected for inclusion in the “Coffee Table Book” to be released by the Honb’le Prime Minister.