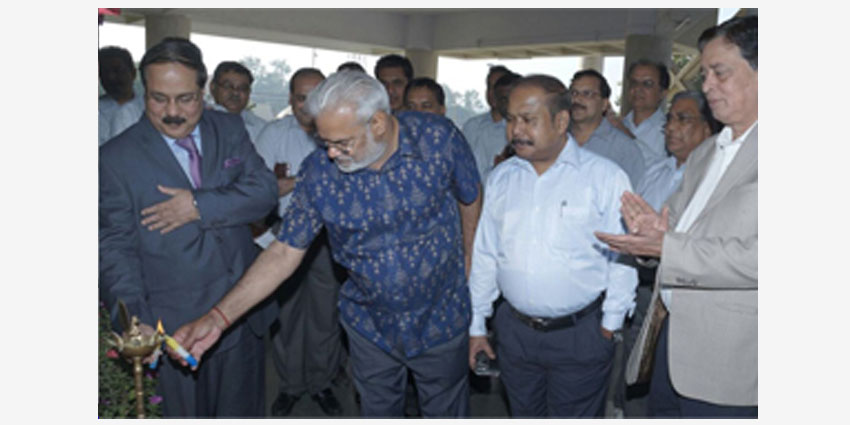 Bhubaneswar, 08/12/2015: National Aluminium Company Limited (NALCO), the Navratna PSU, under the Ministry of Mines, Govt. of India and Gujarat Alkalies and Chemicals Limited (GACL), a Govt. of Gujarat promoted company, have launched a joint venture to set up a Rs 1800-cr Caustic Soda Plant. Shri Tapan Kumar Chand, CMD, NALCO, laid the foundation-stone of the proposed plant, after Bhumi Puja at Dahej in Gujarat today.

The new JV company, GACL-NALCO Alkalies & Chemicals Private Limited, in which NALCO holds 40% share capital, while GACL holds the rest, plans to produce 2.7 lakh tonnes of Caustic Soda per annum. The land transfer and ordering of plant equipment are in the final stages. The office of the new company was also inaugurated today in Baroda.

“As a backward integration plan of NALCO, the project is expected to be a highly profitable venture for us. NALCO shall purchase at least 50,000 tonnes of Caustic Soda per year to start with, at market price,” Shri Chand informed. It may be mentioned here that the availability of Caustic Soda in India is very low and the major part of the domestic requirement is met at a high cost. The venture will bring in import substitution of Caustic Soda in domestic market.

Among other dignitaries present on the occasion include Shri A.M. Tiwari, IAS, Additional Chief Secretary and MD, GACL, Shri N.R. Mohanty, Director(P&T), NALCO, Shri P.K. Mohanty, IAS, CVO, NALCO and senior officials of both the companies and Govt of Gujarat.

It may be mentioned that NALCO is also in the process of setting up a 0.5 million tonnes per annum Alumina Refinery in Kutch district of Gujarat in joint venture with Gujarat Mineral Development Corporation (GMDC), a Govt of Gujarat Undertaking. The Detailed Project Report (DPR) for the project has been prepared.