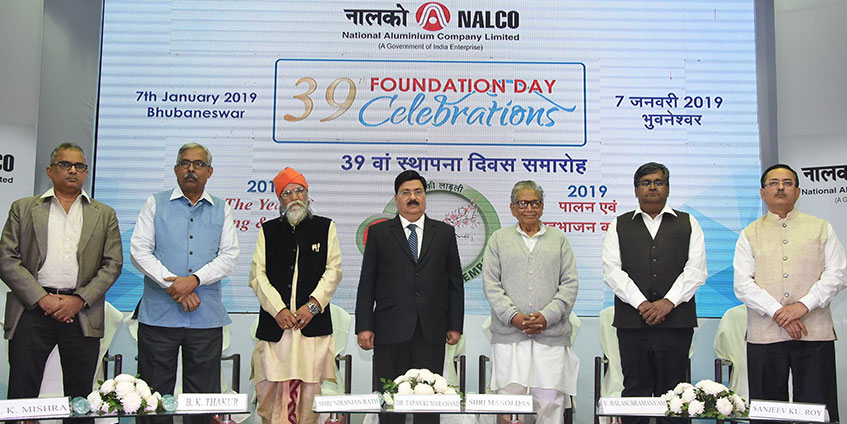 In a historic step that is bound to leave a lasting impact on the cultural and sporting landscape, National Aluminium Company Limited (NALCO) today launched a slew of initiatives to promote cultural organisations and sporting talents in Odisha, to mark the 39th Foundation Day Celebrations. Padma Shri Manoj Das was bestowed with NALCO Lifetime Achievement Award while Shri Niranjan Rath, Secretary, Lok Sevak Mandal was awarded the NALCO Distinguished Social Service Award during the function at Nalconagar, Bhubaneswar.

Inspired by the rich culture and heritage of Odisha, NALCO signed Cultural MoUs with eight leading cultural organisations to promote and encourage artists from across the state. This is a unique initiative by a corporate sector and is a first of its kind which will develop an eco-system of industry – culture sustainable relationship. In order to help Odisha become a Sporting hub, the Company also announced that it will adopt around 100 budding sporting talents.

On this occasion, awards were also presented to individuals and organizations for their significant achievements and contributions in various fields. NALCO felicitated Padma Shri Manoj Das, for his exemplary contribution in the literary field. Besides, for this year, NALCO Kalidas Awards were presented to Dr. Bhaskar Mishra and Dr. Bhagirathi Nanda for their rich contributions in promoting Sanskrit Literature, NALCO Kharavela Awards were bestowed on Guru Shri Bichitrananda Swain, Shri Pravata Kumar Swain and Ms Sasmita Panda for their significant achievements and contributions to Odissi Dance. Dhrutimaya Behera bagged the NALCO Upcoming Star Award while NALCO upcoming Sports Talent Awards were given to Anshika Routray, Prajesh Murmu, Mohit Paswan, Tikaram Soren and Amit Kumar Behera. All the awardees were honoured with a cash award and citation.

As part of Company’s endeavor to encourage Swachhata drive in schools, NALCO awarded ‘Gul Gul- Kun Mun’ awards to 10 schools from Angul and Koraput regions. Continuing its commitment to empower the girl child, NALCO Ki Ladlis were also adopted under the ‘Beti Bachao, Beti Padhao’ programme of Govt. of India.

Addressing the occasion, Dr. Tapan Kumar Chand, CMD, NALCO praised all the awardees for their contributions and highlighted the company’s strong performance and growth while laying focus on taking concrete steps to open the new Coal Mines and giving a strong push to the Wire Rod Mill Project at Angul during 2019. Dr. Chand also applauded the employees for helping the Company achieve the distinction of being the lowest cost producer of Alumina and the 2nd lowest cost bauxite producer in the world. As a leading CPSE and Mother Plant, Dr. Chand said that a Cashless Model is being launched for the MSMEs that will ensure supply of input materials from NALCO and lending marketing support for finished products of MSMEs, making the units ab-initio economic viable and building an industrial ecosystem around the Mother plant. This will enable promotion of local employment where more than 2000 people will be engaged in 200 such MSMEs, he added.